Hands-on with the RED Hydrogen One, a wildly ambitious smartphone - The Verge 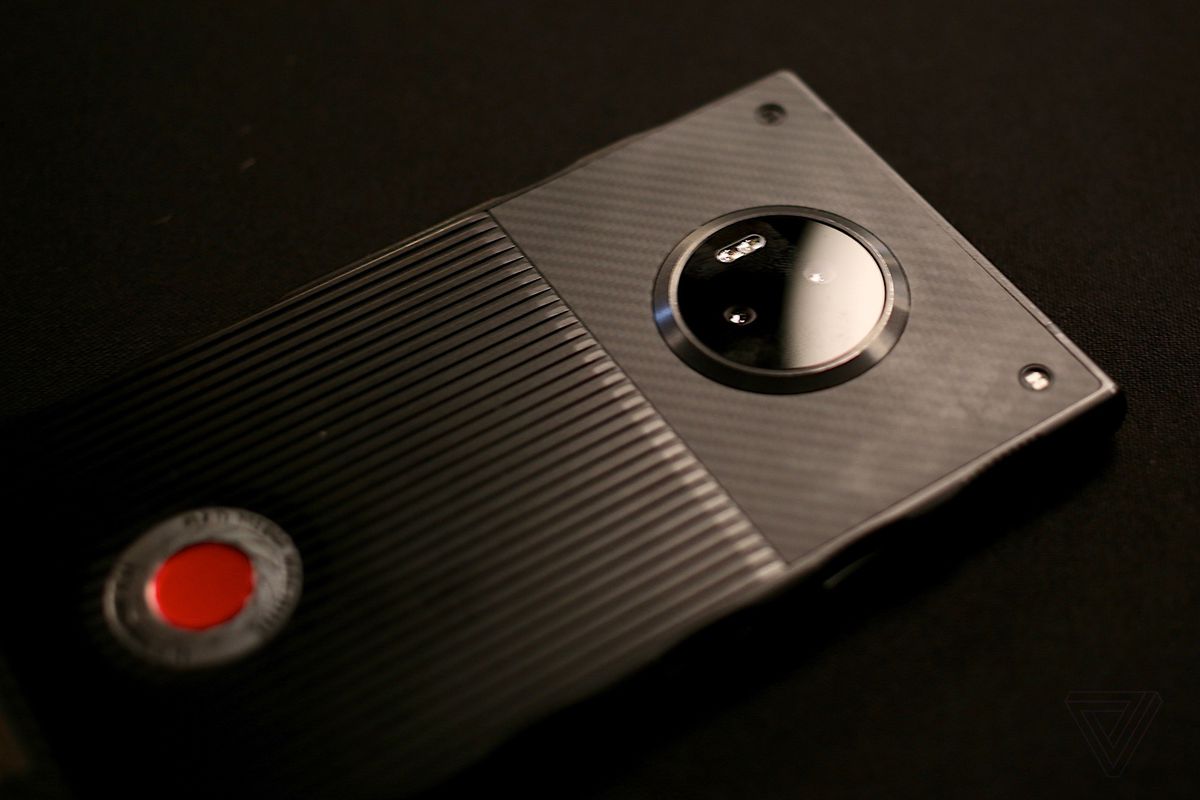 "We just got a look at the upcoming RED Hydrogen One smartphone at an event meant for “RED Pioneers” (read: superfans). It is, without a doubt, one of the most ambitious smartphones in years from a company not named Apple, Google, or Samsung. It’s an Android phone with a 5.7-inch display and top-tier phone specs, but that description doesn’t do justice to what RED is trying to accomplish here.

The company better known for high-end 4K cameras with names like “Weapon” and “Epic-w” isn’t entering the smartphone game simply to sell you a better Android phone (though it does have both Verizon and AT&T signed on to support it). No, this phone is meant to be one piece of a modular system of cameras and other media creation equipment — the company claims it will be “the foundation of a future multi-dimensional media system.”

To that end, it has a big set of pogo pins on the back to connect it to RED’s other cameras and also to allow users to attach (forthcoming) modules to it, including lens mounts. If it were just a modular smartphone, we’d be talking about whether we really expected the company to produce enough modules to support it. Other phones have had mixed results in that department: Moto has released a bunch, Essential has not.

RED is planning on starting with a module that is essentially a huge camera sensor — the company is not ready to give exact details, but the plan is definitely more towards DSLR size than smartphone size. Then, according to CEO Jim Jannard, the company wants any traditional big camera lens to be attached to it. Answering a fan question, he joked that support for lenses will be “pretty limited,” working “just” with Fuji, Canon, Nikon, Leica, and more.

The Hydrogen One is very big. The prototype used we looked at was larger than an iPhone 8 Plus, complete with a USB-C plug, stereo speakers, and a headphone jack. It is also very much a RED product, which is to say it’s incredibly industrial-looking. It comes in either aluminum (pre-order price: $1,195) or titanium (pre-order price: $1,595) and it is not shy about the metal on either model.

It’s covered in metal fins and ridges — the sides have “scallops” to make it easier to hold in one hand, and the power button on the right is where you’ll find the fingerprint sensor. The company’s camera may be called “weapon,” but it definitely feels like you could do some damage with this thing.

I wasn’t really able to do the standard stuff that you normally do with a smartphone hands-on. I couldn’t test out the cameras or spend a bunch of time testing out the speed and responsiveness. These are also definitely prototypes — there were the sort of fit and finish issues you’d expect with such early devices.

The processor inside will be a slightly-out-of-date Qualcomm Snapdragon 835, but it seemed fast enough in the few demos I was able to try. Honestly, though, if you’re looking to get this thing just as a phone, you’re probably making your decision based on the wrong metrics. It’s probably going to be a perfectly capable phone, but at this price what you’re buying into is the module ecosystem.

The other innovation on the Hydrogen One is a fancy new screen technology the company is calling “4-view.” It will allow users to switch the 2560 x 1440 screen from a standard 2D to 3D to a “holographic” view. Unfortunately, it’s not the sort of thing that photographs well — so much so that the company issued a blanket ban on taking any photos or video of the front of the phone.

I tried two different 4 view demos. In the first, I watched a loop of a bunch of different videos and what I saw was a big step over 3D on other phones. Essentially, I was able to move and tilt the phone around without the 3D effect becoming broken. It worked in both landscape and portrait and the depth of the 3D was also better than I’ve seen on a phone before — but of course that’s not very strong praise.

The last phone to really make a go at having a 3D display was the Amazon Fire Phone, which was of course a flop. With that phone, the combination of bad 3D and little reason for it to exist turned the entire enterprise into an industry punchline. For the Hydrogen One, RED is planning on creating a streaming service to provide holographic content.

The second demo was also impressive. With a Hydrogen One, I was doing a simple video chat with somebody across the room. But this was a “Holo chat,” so both my face and theirs was displayed as a hologram in real time. There are two front-facing cameras, as you need two to make a 3D effect.

As for how RED is making this effect happen, it’s complicated to the point of sounding like handy-wavy science fiction filler. Jannard told me that there is a special layer underneath the LCD display which, when enabled, is able to direct light in multiple directions instead of the standard two that happen with lenticular displays. RED is also doing more than just combining two images to make standard 3D — I’m told it’s trying to use an algorithm to blend multiple angles from those two lenses to create the effect.

It’s a hologram, basically, but it doesn’t really pop out of the screen so much as give you depth within it. I wouldn’t describe this screen as the reason to go out an buy this phone, but it was neat.

RED has also talked big game about the audio on this phone, beyond the built-in stereo speakers (and, again, headphone jack). The company’s claim is that it can do for audio what it’s doing for images: create a virtual surround sound effect through its algorithms. In the demo, the “A3D” sound did have rich stereo separation just from the phone’s stereo speakers, but mostly they were just super loud.

However, with headphones the effect is much more impressive, I’m told. I haven’t yet had a chance to try to it myself (stay tuned for updates), but fans at the event described it as being just as good as Dolby 5.1 surround. They said it effectively made you believe you were hearing noises directly behind and even above you.

Its unapologetically industrial and beefy design is likely to be polarizing

RED is absolutely running the RED playbook: lots of hype, lots of big promises about amazing technology, and honestly lots of questions about whether all of this adds up to a real product that lots of people will want to buy. But the thing is: it doesn’t have to be that last thing — RED cameras are only for a small niche of people, after all.

I came away from my time playing around the Hydrogen One thinking that as a phone, its unapologetically industrial and beefy design is likely to be polarizing. I also think most people will be better served by getting something cheaper. As a hologram making and viewing machine, it’s a solid technical improvement over what I’ve seen before, but whether anybody really needs or wants that on a phone remains to be seen. As the basis for a system of phone modules, there’s still a lot to prove and a long history of competitors who tried and whiffed.

The most compelling part of the Hydrogen One isn’t the phone itself, honestly, it’s the RED ecosystem of cameras. If the company can find a way to make it an essential part of a filmmaker’s kit alongside its other cameras, it could have a successful niche product on its hands. Beyond that, though, we’ll have to wait for more final devices to really say for sure."

Hands-on with the RED Hydrogen One, a wildly ambitious smartphone - The Verge
Posted by John H Armwood II at 11:00 AM