By Ross O. Storey, MIS-Asia Mar 5, 2011 8:40 am
With Apple's launch of the second version of its iPad, research house Ovum predicts that it will take until 2015 for devices running Google's Android platform to catch up.
Ovum principal analyst Adam Leach said that in such a fast-moving market, Apple was forced to release a new version of its iPad hardware to stay ahead.
"Apple clearly had first mover advantage. However, its competitors have been hot on its heals with a slew of tablet devices from big brand vendors such as Samsung, Motorola, HP, HTC and RIM, all of which have announced tablet devices which aim to replicate the Apple experience, which is notoriously difficult to match," Leach said.
"Much of the early growth of the tablet market can be attributable to the Apple iPad, a device whose sales constituted 90 per cent of the total market opportunity in 2010. The remaining 10 per cent of shipments in 2010 was made up of devices running variants of Google's Android OS".
Honeycomb Popular
Leach said most device vendors are looking to exploit Google's latest version of the Android operating system, honeycomb, to deliver a user experience that can compete with Apple's own iOS.
"However, some vendors, notably HP and RIM, are choosing to invest in their own software platforms," he said.
"Ovum's belief is that the platform dominance of Apple and Google will continue through 2011 and beyond, albeit with devices based on Google's software platform commanding an increasing proportion of the total market opportunity".
"However, devices based on Google's platforms will only overtake those based on Apple's platform by 2015, when we forecast 36 per cent and 35 per cent market shares respectively, of a total market with shipments of about 150 million units in 2015," Leach said.
This compares with Ovum's estimate of 10 per cent for Google and 90 per cent for Apple at the end of 2010.

Posted by John H Armwood II at 6:56 PM No comments:

SEOUL, South Korea — Forty Web sites in South Korea were attacked by a computer virus on Friday, including the official sites of the presidential Blue House, the Foreign Ministry, the country’s biggest bank, the country’s two largest search engines, a major online auction house and some American and Korean military sites.
It was not immediately clear who was behind the attack, but the National Police Agency is investigating the assault, which was discovered by AhnLab, an Internet security firm in Seoul.
Computer analysts said the problems amounted to a so-called denial of service attack, in which multiple computers infected by a software virus try to access targeted Web sites simultaneously. That can overwhelm the sites with a surge of traffic that crashes their servers.
WordPress, one of the largest blog-hosting sites on the Internet, was attacked this way on Thursday, the company said.
A South Korean government official said Friday that there had been “no major damage at all” to computer systems at the Blue House, the executive office and official residence of South Korea’s president.
“We were attacked, but it was defended,” the official said, noting that the Blue House and other agencies had installed security countermeasures after a major cyberattack on South Korean government sites in July 2009. He said the effect of that attack had been “quite chaotic.”
An AhnLab spokesman, Song Chang-min, said the two attacks had similarities, including the targeted sites. AhnLab discovered the virus on Thursday and quickly distributed a free antivirus solution for downloading.
“This wasn’t as serious as 2009, but it still makes servers go down,” Mr. Song said. “Some Web sites going down for even a minute or two, especially commercial sites, can be a big problem. It can be critical.”

Posted by John H Armwood II at 8:32 AM No comments: 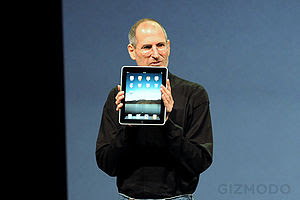 Image via WikipediaMacSparky - Blog - Thoughts on The Post PC World

I watched the Apple Keynote tonight and was struck by how often I heard the term “Post PC.” When Steve Jobs and Apple start using these catch phrases, it is no accident. Apple has its own lexicon that starts internally but, at some point, often finds its way into Keynote speeches and product descriptions.
I believe “Post PC” is the newest of these phrases. We’ve all speculated about the future of technology in light of the explosive growth of iOS and the growing legions of mobile competitors. To the people at Apple, I don’t believe this dialogue is anything new. Internally, I think they’ve been planning this for years.
Looking back, I suspect Apple first started contemplating the Post PC world when iPods were selling like hotcakes. I’m certain that by the time the iPhone showed up, Apple’s Post PC plans were already in full swing. When the iPad appeared, the shoe dropped for the rest of us. Steve Jobs confirmed this last year at the AllThingsD conference when he talked of trucks and cars and how the PCs we all know and love are going to become the trucks of technology: still useful, but not necessary for most.
This all culminates today with Apple’s repeated mantra about the “Post PC” world. Why are we just hearing about this now? Because Apple is already sitting on top of the mountain in this new order.
I’ve written before about Mac user’s fear of returning to those dark days. I suspect there is a certain degree of that also ingrained in the Apple corporate culture. I’m not sure I’d call it fear so much as resolve with this second chance. Never again.
Never again will Apple blow its lead. Never again will Apple seize defeat from the jaws of victory. Never again in this new Post PC World.

Man triumphs over machine - Rep. Rush Holt, D-N.J., explains how he beat the IBM supercomputer, known as Watson, in a mock Jeopardy contest.

Visit msnbc.com for breaking news, world news, and news about the economy
Posted by John H Armwood II at 9:00 PM No comments:

Posted by John H Armwood II at 5:09 PM No comments:

Apple on Thursday gave us another sneak peek at whatʼs in store for the next major release of Mac OS X, dubbed Lion, due out this summer. Between the iOS-inspired features we saw in the first Lion preview in October and the new features the company revealed today, itʼs clearer than ever that Apple isnʼt merely getting Back to the Mac. With Lion, Apple is getting back to basics, making significant changes and adding new features that are all focused on making the Mac easier to use and more accessible to both new and longtime users.
Apple has always touted the Mac as the “computer for the rest of us,” wearing its reputation on its shoulder for designing intuitive interfaces and great experiences. But there have always been parts of Mac OS X where those claims just donʼt hold up. Remember the last time you tried to explain to your parents or non-technical friends how to download and install Firefox from a Disk Image—or for that matter, what a Disk Image even is? With the meteoric rise of iOS and the iPad changing our perception of the personal computer, Mac OS X can sometimes look downright Windows-y by comparison.
Lion is designed to fix that.
You got your iOS in my Mac OS
Apple isnʼt kidding around when it says the iPad was the inspiration for many of the big additions and changes in Mac OS X Lion. In the October preview, we saw some of the blossoming fruits of iOSʼs muse: full-screen apps, even deeper multitouch support with new gestures, and a new Launchpad view of all your apps that was stolen straight off the iPadʼs homescreen—all are focused on making parts of Mac OS X and our apps more accessible.
There is a general theme in Lion of simplifying Mac OS X, either by streamlining existing features or by bringing iOS workflow perks to the Mac. For example, Apple unveiled a new Lion feature on Thursday, called AirDrop, which is “a remarkably simple way to copy files wirelessly from one Mac to another with no setup.” But this just sounds like an update and rebranding of the Bonjour file sharing and public folder features that Mac OS X has had all along, except the goal of AirDrop is to make file sharing between family and coworkers much, much easier to grasp and use. Like it did for some parts of iOS, Apple simplified existing Mac OS X features and polished them up with a better interface.
There are plenty of other more subtle tweaks that are making the pilgrimage from iOS to Mac OS, all in the name of streamlining the interface and the many ways we interact with apps. From more legible and universal icons (see Mail 5 on Appleʼs Lion page), to popovers (see iLife ʼ11), to scrollbars that can hide when you donʼt need them, Mac OS X Lion will simply look cleaner and more intuitive than any of its predecessors, and it has iOS to thank.
Viva la Mac
But if the iPad was “just a giant iPod touch,” is the Mac becoming “just a giant iPad?” Not in the least. The file system hasnʼt gone anywhere, the Finder looks to have received some much- needed attention, and despite concerns of Apple embracing digital totalitarianism after announcing the Mac App Store, you will not be forced to give up the ability to install software from anywhere on the Web.
Another new Lion feature Apple announced, “Resume,” is also an ode to iOS, but it will likely have an even larger impact on the Mac. Just like switching between apps on an iPad or iPhone, or even restarting the device, Resume is Lionʼs official support for third-party Mac apps to pick up right where they left off, even after a restart. Thatʼs not merely a good idea in iOS, itʼs just a good idea for any reasonably complex computing device—especially one that is designed to multitask and juggle many apps and open windows with ease.
Speaking of recovering your data, a pair of new features will make it easier to continue working with individual documents and recuperating lost data—key requirements of any worker bee who needs more power and flexibility than iOS typically offers. Auto Save will allow apps to automatically save your work as you create it, while Versions brings the continuous backup concepts and interface behind Time Machine down to a per-document basis. You will be able to step back through the history of the current file on-the-fly and easily revert to a previous iteration.
Great artists reciprocate
iOS and Mac OS X are symbiotic entities. When designing iOS, Apple distilled the Mac down to something pocketable, but the core concepts are there, such as an app-centric workflow, an always-accessible “home base” Dock, and a fierce pursuit of intuitive interfaces. After gaining knowledge and experience from nearly five years and four versions of iOS, Apple clearly felt that it's time to return the favor in Lion. Apple is incorporating some of the fresh simplicity of iOS back into its point-and-click desktop computing platform that, at its conceptual core, is almost three decades old.
When Lion arrives, the Mac might begin to resemble some aspects of Appleʼs simpler, more streamlined OS thatʼs designed for mobile devices. But thatʼs only because they are fundamentally good ideas that can polish a full-featured desktop platform and make it even easier to use, without sacrificing any of the power and flexibility that brought users to the platform to begin with.
[David Chartier is a Macworld associate editor.]

Posted by John H Armwood II at 9:57 AM No comments: