Microsoft and Adobe are looking at ways to stave off Apple, and considering an Adobe acquisition, The New York Times reports.
Robert McMillan
Thursday, October 07, 2010 04:10 PM PDT
The chief executive officers of Microsoft and Adobe met recently to discuss how best to deal with their common foe -- Apple -- and whether a Microsoft buyout of Adobe might be in the cards, The New York Times reported Thursday.
Citing unnamed sources, the Times reported that Microsoft CEO Steve Ballmer met with Adobe CEO Shantanu Narayen to discuss "Apple and its control of the mobile phone market and how the two companies could partner in the battle against Apple."
Microsoft declined to comment on the report. In a statement, Adobe acknowledged that Ballmer and Narayen had met. "Adobe and Microsoft share millions of customers around the world and the CEOs of the two companies do meet from time to time. However, we do not publicly comment on the timing or topics of their private meetings," Adobe said.
As Apple gains both developers and users with its iPad and iPhone products, Adobe and Microsoft run the risk of being pushed aside on mobile devices, the most exciting platform for today's software developers.
Microsoft has tried and mostly failed to generate enthusiasm for past versions of its mobile-phone software, and Adobe is under pressure after Apple decided not to allow Adobe Flash applications to be approved for use on its devices.
More...

DALLAS, October 6, 2010—FedEx Office (formerly FedEx Kinko’s), an operating company of FedEx Corp. (NYSE: FDX), today announced the introduction of free, unlimited Wi-Fi access at most of its U.S. locations. As of today, customers will find the free Wi-Fi service provided through AT&T* at more than 1,000 FedEx Office Print & Ship Center locations throughout the U.S. The remaining rollout of the company’s free Wi-Fi service is scheduled to be completed by the end of the month. Provided courtesy of FedEx Office, this new offering will help busy professionals connect to the Internet from a location that is conducive to working on the go and offers convenient access to business support services.

Posted by John H Armwood II at 7:21 PM No comments:

As expected, Facebook's big event today did involve some new design elements. But it's the features being announced that give a crucial look at the site's even bigger ambitions.
The first feature Mark Zuckerberg announced, Download Your Information, lets you download all of your photos, messages, videos, etc. Simple enough! It all goes into a single zip file, so that it's all in one place, which will then be emailed to you. As for privacy concerns, you'll need to provide a password and possibly answer more security questions. Whether you feel totally comfortable having all that info passing back and forth is up to you.
More...

Posted by John H Armwood II at 4:45 PM No comments:

Apple Inc. plans to begin mass producing a new iPhone by the end of 2010 that would allow Verizon Wireless to sell the smartphone early next year, said people briefed by Apple.
The new iPhone would be similar in design to the iPhone 4 currently sold by AT&T Inc. but would be based on an alternative wireless technology called CDMA used by Verizon, these people said. The phone, for which Qualcomm Inc. is providing a key chip, is expected to be released in the first quarter of next year, according to the same people.
More...

Posted by John H Armwood II at 4:41 PM No comments:

US-CERT Current Activity
Adobe has released updates for Adobe Reader and Acrobat for Windows, Macintosh, and UNIX. These updates address multiple vulnerabilities including those described in Adobe security advisory APSA10-02 and Flash Player security bulletin APSB10-22. Exploitation of these vulnerabilities may allow an attacker to execute arbitrary code or cause a denial-of-service condition.
Posted by John H Armwood II at 11:54 AM No comments: 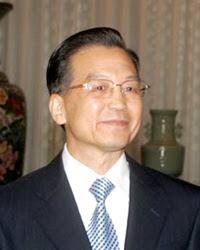 Once more your faith in the basic nature of political leaders is confirmed.

Wen Jiabao: China now has over 200 million Internet users, and the freedom of Internet in China is recognized by many, even from the west. Nonetheless, to uphold state security, China, like many countries in the world, has also imposed some proper restrictions. That is for the safety, that is for the overall safety of the country and for the freedom of the majority of the people.

I can also tell you on the Internet in China, you can have access to a lot of postings that are quite critical about the government.

It is exactly through reading these critical opinions on the Internet that we try to locate problems and further improve our work.

I don't think a system or a government should fear critical opinions or views. Only by heeding those critical views would it be possible for us to further improve our work and make further progress.

I frequently browse the Internet to learn about a situation.

Zakaria: What are your favorite sites?

Posted by John H Armwood II at 1:44 PM No comments: