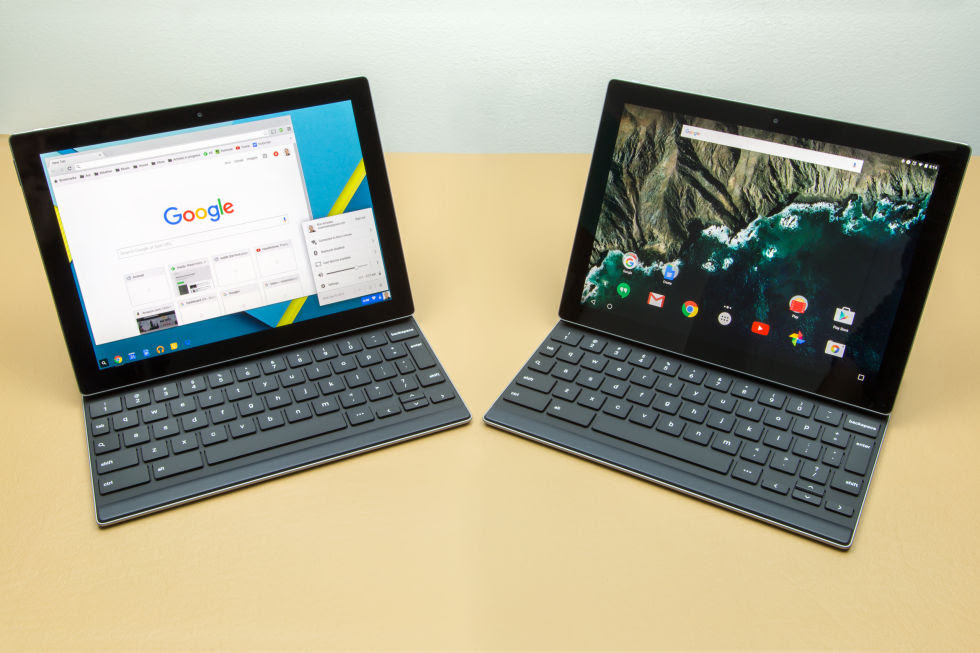 Was Android actually Google's third operating system choice for its new Pixel C tablet?
The Pixel C finally went on sale this week—but our full review notes that the convertible tablet feels like hardware in search of the software to make it a compelling product. Perhaps that's because, internally, Google engineers seem to have been searching for a compelling Pixel C software package for the last year and a half.
The contradiction between hardware and software is visible all over the tablet, so two examples will suffice. The hardware's keyboard and big screen would point to it being a productivity device, but the software's lack of a split-screen mode and apps optimized for the screen's size hamstring the Pixel C. The hardware seems geared for voice command functionality, given its array of four top-mounted microphones, but the software doesn't support Google's always-on voice commands.
It's also odd that the device hails from the Pixel team. Google has two big hardware brands: "Nexus," which covers flagship Android devices, and "Pixel," which denotes flagship Chrome OS devices. With the Pixel C, though, the Pixel team broke ranks and produced an Android tablet.
In our view, the Pixel C's irregularities all have a single explanation: the Pixel C was originally a Chrome OS device.
Back in July 2014, a new "Ryu" board (a "board" is just a reference to "motherboard"—a Chrome OS device under development) popped up in the Chrome OS open source repository. Further trips through the Chrome OS source code revealed that "Ryu" had a light bar, USB Type-C connectors, an Nvidia Tegra SoC, and wireless charging. That sounds an awful lot like the Pixel C (especially the wireless charging, which is used to charge the keyboard via the tablet's battery when closed).
Open up the Pixel C's software and take a look at Android's build.prop file—which lists all sorts of base information about the device—and you'll see "ro.product.name=ryu" listed in the properties. Based on this commit, it’s safe to say that at one point Google was definitely developing Chrome OS for its new Android tablet.
It appears that the Pixel C was planned as launch hardware for a new, all-touch version of Chrome OS which at some point got canceled—necessitating a switch to Android. The story is a lot more complicated than that, though. What follows is the best timeline we could piece together showing the Pixel C's troubled development history.

Why Yahoo faded: The Internet changed, but it didn't - CNET

"Yahoo and I go way back.
I was one of the early adopters who embraced Yahoo as my main email service back in 1998 and who set up a custom My Yahoo page (remember those?) so all of the pertinent weather reports, stock quotes and headlines were at my fingertips.
Seventeen years later, Yahoo isn't even on my list of sites to check in on. There's my (non-Yahoo) email, and Facebook, of course, as well as a handful of news sites. The idea of an all-encompassing portal just doesn't appeal to me anymore.
I'm hardly alone. Yahoo said Wednesday that it plans to hollow itself out, spinning off its core business and leaving the company as little more than a way for shareholders to keep Yahoo's stake in Chinese e-commerce giant Alibaba Group."
Why Yahoo faded: The Internet changed, but it didn't - CNET
Posted by John H Armwood II at 9:29 AM No comments:

Introducing the Pixel C (US)

Posted by John H Armwood II at 7:42 PM No comments:

Posted by John H Armwood II at 8:27 PM No comments: