The Palm Treo 700w (aka Treo 670) - Exclusive first look!
Posted Sep 22, 2005, 1:00 PM ET by Peter RojasRelated entries: Cellphones, Features
Check it out: we got our hands on the new Windows Mobile-powered Treo, but it ain’t called the Treo 670 anymore (if it even ever was called that), it’s the Treo 700w (which implies—but doesn’t guarantee—the existence of a Palm-powered Treo 700p). We haven’t spent enough time with the 700w for a proper review — we’ve literally had it in our hands for only a few hours — but we couldn’t resist posting up this first look:
Horizontal screen orientation.Treo 700w vs. Treo 650. The 700w is actually a bit narrower than the 650.“Welcome to the Palm 700w smartphone…”Plug-and-play. Getting online with an SD WiFi card could not have been any easier.With the battery removed.A few confirmed specs: Windows Mobile 5.0, one megapixel camera, EV-DO, Bluetooth, 64MB of memory, still trying to conclusively determine the resolution of the display, but it looks to our eyes like it’s 240 x 240 pixels, not 320 x 320. But we’re not 100% on that, ok?
Posted by John H Armwood II at 3:00 PM 4 comments: 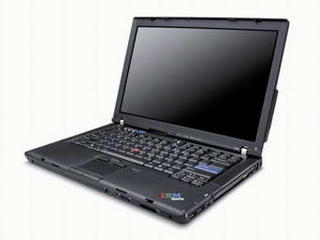 In addition to the classic black ThinkPad design, the new Z Series is available in a special-edition, brushed titanium cover. Titanium offers a sleek new look, durability, and scratch resistance for one of the world’s most well-known notebook brands.

The ThinkPad Z60m’s 15.4-inch display offers 30 percent more data space than a 15-inch XGA and better viewing angles for notebook use on an airline flight. At 1.1-inches thick and just 4.2 pounds, the 14-inch ThinkPad Z60t is the thinnest and lightest widescreen notebook in its class. The Z60t boasts 25 percent more data space than a standard 14-inch XGA screen — the equivalent of four additional spreadsheet columns — offering a productive solution to business users who often work with multiple applications simultaneously.

The Z60m and Z60t are the first standard notebooks ever to integrate a high-speed, Evolution Data Optimized (EV-DO) wireless wide area network (WWAN) antenna for Verizon Wireless Broadband Access. The built-in WWAN antenna helps avoid many of the pitfalls associated with PC cards, including hardware incompatibility and fragile, easily damaged antennas protruding from the computer. Verizon Wireless’ network features one of the fastest connection rates in the U.S. with average speeds between 400-700 kilobytes per second. It also provides another layer of data security and protection, as it isn't susceptible to the same vulnerabilities as a shared hot spot connection, such as data theft.

Several innovative multimedia features — including hot keys to control application functions and ports to easily upload digital images and video — make the Z Series optimal for business or home use, including presentations, multimedia and DVD movies.

"One of the trends we're seeing in small businesses is that the line between work and home is blurring," said Chuck Sharp, vice president, Information Technology Solution Providers Alliance (ITSPA). "It's not efficient to spend money on separate pieces of technology for all aspects of your life. Time is at such a premium, that small businesses are looking for technology that not only improves their productivity at work, but also allows them to maximize their personal time — at home and when traveling."

For business travelers, the Z Series features a new inner armor chassis — a ThinkPad "Roll Cage" — that reduces the amount of stress on internal components when the notebook is dropped by up to 30 percent. The internal components, including the hard disk drive, are mounted in a one-piece magnesium cage that forms a more protective shell than traditional casings without affecting usability. Combined with Lenovo’s Active Protection System, a ThinkVantage Technology, the ThinkPad "Roll Cage" provides a strong solution to defend against costly hard disk damage. The Roll Cage will be deployed in the Z-Series and future ThinkPad models.

The widescreen TFT display is encased in an optional special edition titanium cover that is both durable and scratch-resistant. New Windows, multimedia and application keys enhance the legendary full-size ThinkPad keyboard. Lenovo strategically placed the large stereo speakers on either side of the keyboard for superior sound quality and volume. Adding to the multimedia capabilities are an array of ports for nearly every peripheral, including three USB 2.0 ports, as well as connections for S-Video, VGA and IEEE1394. The Z60m also boasts a 3-1 media card reader.

New ThinkVantage Technologies by Lenovo provide more powerful features in a centralized dashboard, making PC security quick and simple. The new ThinkVantage Productivity Center helps improve worker productivity by guiding them toward self-help and appropriate ThinkVantage Technologies. For example, one new feature is "Away Manager," which helps people run system-maintenance tasks when they know they will be away from their computer. These could include pre-loaded and pre-tested tasks such as Symantec Client Security, Windows Defrag, Windows Disk Cleanup, and Lenovo's own Rescue and Recovery backup utility. Productivity Center and Away Manager also help company IT departments customize the tools, enabling them to add their own regularly scheduled tasks, such as other anti-virus or anti-spyware utilities, as well as custom Web links, applications, and help files. In addition, Away Manager's "whisper-mode" enables anti-virus and disk cleanup tools to run more easily in the background, occupying a smaller percentage of system resources, with less impact to the user's valuable work time.

The Z Series come equipped with the latest version of the ThinkVantage Client Security Solution, which enables users to recover logon passwords themselves. For added security, the Z-Series also is available with Lenovo’s integrated fingerprint reader, a convenient and secure biometric solution for password management. It also features easy and powerful disk encryption, updated password manager software, and a System Security Audit to ensure users are properly securing their system.


NEW YORK - The price gap between cable broadband service and phone carriers' digital subscriber lines widened to an all-time high in August, according to a survey by SG Cowen.

Cable-modem service was, on average, 75.8 percent more expensive than DSL during the month, up from a 53.3 percent gap in July. While phone carriers cut prices — the average DSL price decreased by 9.2 percent — cable companies raised them.

Leading the price decline was Verizon Communications which rolled out a slower service that cost just $14.95 a month, with a free month of service with a one-year commitment.

By contrast, cable broadband service got 4.1 percent more expensive, on average. Comcast Corp. raised prices an average of 7.9 percent, while Time Warner Cable raised by 5.8 percent, according to the survey.

Cable companies "must continually reassess whether to accept share losses or to fight back by reducing high speed data pricing and accepting lower margins," Singer wrote.

Singer or one of the other authors of the report own shares of Cablevision; SG Cowen or one of its affiliates has managed or co-managed a public offering of Cablevision and Comcast securities in the last three years.