Although it has been widely assumed that HP's upcoming cellular-wireless Pocket PC will be offered by Cingular, there's been no evidence of that.

However, while it's hardly conclusive, a Microsoft MVP has essentially promised that the iPAQ hw6500 will be offered by Cingular.
A Little Background Info

HP iPAQ hw6500Everyone has been assuming that this model will be offered by Cingular because HP is heavily touting its support for EDGE high-speed wireless networks.

Cingular is the only U.S. company with a significant EDGE wireless network.
New Info

In this, he specifically says that this handheld will be offered by Cingular.

As a Microsoft MVP specializing in the Windows Mobile operating system, Schurman is in the position to have inside information on this device.

This doesn't mean that Cingular will be the only carrier to offer this handheld. It uses GSM/GPRS wireless networks, so it can function as a voice and data device on most of the wireless service providers' networks worldwide. However, the data transfer speed won't be as high as it is with Cingular.

"I received information on HP partnering with Cingular for the hw6500 from another website before I put this presentation together and spoke in conversation to a fellow HP rep. At this time, HP has not made an announcement as to who the carrier is and therefore, I have removed the last bullet under the Cingular slide due to a request that I received today. I am among those who are anxious to see when this device will be released and who will provide service for it."

Overview of the iPAQ hw6500

The iPAQ hw6500 will run the Phone Edition of Windows Mobile 2003 SE on a 312 MHz Intel XScale processor.

It will have 64 MB of RAM, of which 46 MB is user accessible. This handheld will include an 8 MB File Store.

This will be the first Pocket PC from any company with a square (240 by 240 pixel) screen. This will be 2.2 inches on each side.

Below the screen will be a backlit QWERTY keyboard.

The hw6500 will have a pair of memory card slots, one for SD/SDIO cards and a second for miniSD cards.

It will include a built-in GPS receiver and TomTom Navigator software. Users will be able to download one city map for free. Additional maps will cost extra.

It will have Bluetooth short-range wireless networking, but not Wi-Fi.

HP says this device will be available in the second half of April. The exact price is still not known, but it is expected to cost about the same as HP's other cellular-wireless Pocket PC, the iPAQ h6315. 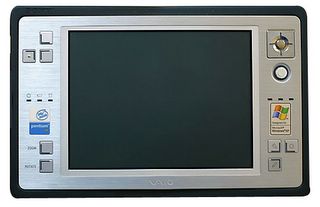 Sony Vaio U-71 @ Dave's iPAQ: "any of you are probably wondering how I got my hands on an ultra portable computer that is only available in Japan? Well a company named Dynamism specializes in importing ultra-cool Japanese portable computers and shipping them to eager enthusiasts around the world. We are also lucky enough to be an affiliate through Mobile Planet to offer these great ultra portable computers to you directly. After reading this review you will know why I want to keep this small pda like computer. The device I received was the Sony U-71 sporting a 1.2 GHz Pentium M processor with 512MB of memory and a 30 gig hard drive, 802.11b/g Wireless LAN, CF Card Slot; Memory and the traditional Sony Memory Stick slot! Users should note the U-71 does not come with any sort of optical drive since they consider them option accessories.
Experience

The U-71 is designed to be operated for the mobile user on the go. The pointing stick is on the right hand side of the screen, and the mouse buttons are on the left. The left mouse click key has a small notch, so your fingers identify immediately. Of course, you can also use a stylus (not included) or finger on the touch-sensitive screen to navigate--a fantastically fast and efficient method which I used most of the time. I did notice the fin-like stylus is much more comfortable than the regular stick-stylus. Text input can be through the external, foldable USB keyboard which is included. The keyboard folds up to a sleek profile, and can be connected directly to the Vaio or through the included port replicator. An eraser-type pointer and mouse buttons are integrated into the keyboard. Or, you could write directly onto the screen, via Sony's handwriting recognition software. There is also a software-based on-screen keyboard but I did have some issues using the bundled software so I downloaded a new beta software by NostramU Board which made the keyboard more of an onscreen thumb keyboard which makes th"
Posted by John H Armwood II at 6:25 AM 8 comments:

Chatsworth, California. -- April. 4, 2005 - The UK based eXpansys Group today announced that they have acquired MobilePlanet Inc., the leading US multi-channel reseller of mobile computing and wireless products. MobilePlanet posted revenues of USD $21 million in 2004.

The Acquisition will help to secure the groups position as the premier specialist online retailer of mobile devices in the world with a forecast turnover of $200 Million for the next financial year.

MobilePlanet will continue operations under its own brand name and as a separate company taking advantage of Expansys' warehousing, logistics and software development facilities, the company plans to maintain all existing customer, supplier and partner relationships and will actively seek new partners of all kinds for the combined business over the coming months.

Roger Butterworth CEO of eXpansys Group said " We are delighted to be completing this deal to bring together the two largest players in the online market for mobile devices in the USA, we are looking forward to bringing the best of MobilePlanet and eXpansys to all of our customers worldwide " eXpansys Holdings Ltd, a company based in Manchester, England is the leading worldwide specialist distributor of mobile technology which owns eXpansys and Portable Add-Ons. With operations in the U.K., U.S., Europe and Asia the companies serve customers in over 140 different countries. By expanding its position in the U.S. market, this acquisition is a major step in the international development of the business.

The U.K. group plans to use the MobilePlanet brand name in the U.S. and other key markets to accommodate this the group holding company, eXpansys holdings Ltd will be re-named as Mobile and Wireless Group Ltd (M&WG), eXpansys and Mobile Planet will continue to trade separately. CONTACTS