Posted by John H Armwood II at 2:39 PM No comments: 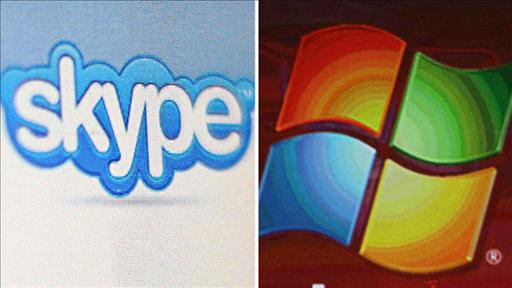 By ANUPREETA DAS And NICK WINGFIELD
Microsoft Corp. agreed Tuesday to buy Internet phone company Skype Technologies SA for $8.5 billion in cash—the most aggressive move yet by Microsoft to play in the increasingly converged worlds of communication, information and entertainment.
Skype will become a new business division within Microsoft, and Skype Chief Executive Tony Bates will assume the title of president of the Microsoft Skype Division, reporting directly to Microsoft Chief Executive Steve Ballmer.
The deal allows Microsoft to integrate Skype's free and low-cost Internet-based video and telephony services into everything from its Bing search engine to Windows smartphones and its Xbox videogame system. The need to add a communications component is seen as crucial with the growing popularity of Apple Inc.'s Facetime video-chat service and Google Inc.'s Voice.
Microsoft has invested heavily in marketing and improving the technology of its Bing search engine. While it has made some market share gains over the past year, Google still dominates the search market with more than 65% of U.S. searches going through its site.
About 170 million people log in to Skype's services every month, though not all of them make calls. Skype users made 207 billion minutes of voice and video calls last year.
"Skype is a phenomenal service that is loved by millions of people around the world," Mr. Ballmer said in a statement announcing the deal Tuesday. "Together we will create the future of real-time communications so people can easily stay connected to family, friends, clients and colleagues anywhere in the world."
The Skype deal ranks as the biggest acquisition in the 36-year history of Microsoft, a company that traditionally has shied away from large deals. In 2007, Microsoft paid approximately $6 billion to acquire online advertising firm aQuantive Inc. Many current and former Microsoft executives believe Microsoft significantly overpaid for that deal. But they are also relieved that Microsoft gave up on an unsolicited $48 billion offer for Yahoo Inc. nearly three years ago. Yahoo is valued at half that sum today.
Mr. Ballmer, though, sees the Internet as an essential battleground for Microsoft, a company that still makes the vast bulk of its profits from Windows and Office software systems. Investors have become increasingly concerned about Microsoft's ability to squeeze continued growth out of those businesses, as rival technologies from Apple, Google and others put more pressure on profits.
The division behind Microsoft's hugely lucrative Office suite of applications also makes a product, known as Lync, which ties together email, instant messaging and voice communications into a single application. Skype could strengthen that offering.
The deal shows how far Skype has come since it was launched in 2003 by Niklas Zennstrom and Janus Friis, two men who had created a file-sharing technology called Kazaa that became widely associated with music piracy. While Skype was initially popular with techies, it increasingly worked its way into the mainstream by offering free or cheap phone calls which were especially appealing to international callers.
When eBay Inc. purchased the company in 2005 for $2.6 billion in cash and stock, Skype was regarded as something of an experiment in which eBay's buyers and sellers would use the service to communicate about potential transactions.
The experiment faltered, and eBay gave up on Skype in 2009,selling a 70% stake to a group of technology investors including Silver Lake Partners, venture capital firms Index Ventures and Andreessen Horowitz, and the Canada Pension Plan Investment Board, who will make a handsome return on the Microsoft transaction.
Goldman Sachs Group Inc. and J.P.Morgan Chase & Co. advised Skype on the deal, according to people familiar with the matter. Microsoft isn't using any financial advisers for the deal, the people added.
The agreement was approved by the boards of Microsoft and Skype and is subject to regulatory approvals.
Microsoft shares fell 2.1% to $25.29 in early trading Tuesday, while eBay shares were up 2.8% to $34.06.
For all its promise, Skype has had a mixed history as an operating business. It has produced little net profit in the eight years since it was founded. Profits continue to remain elusive as the company expands its business world-wide. Last year the company posted revenue of $860 million and $264 million in operating profits, but still had a loss of $7 million. The company had $686 million in long-term debt as of Dec. 31.
Skype uses a technology called voice over Internet protocol, which treats calls as data like email messages and routes them over the Internet, rather than a traditional phone network. Skype's software, which can be downloaded free, allows users to call other Skype users on computers or certain cellphones for free. Skype users can also call land lines for a fee and conduct video calls.
Skype could play a role in Microsoft's effort to turn around its fortunes in the mobile-phone market, an area where it has lagged behind rivals Apple and Google. The company last year launched a new operating system for mobile phones known as Windows Phone 7 that has been well reviewed by technology critics but hasn't yet meaningfully improved Microsoft's market share.
Microsoft will likely need to tread carefully, though, in integrating Skype into its mobile software because of the potential for pushback from wireless carriers, whose support Microsoft badly needs. Skype could give consumers a way to make cheap phone calls over the Internet from mobile phones, without paying higher rates to the carriers.
Last August, Skype filed documents to go public but put its IPO plans on hold after bringing in Mr. Bates. Skype had expected to raise close to $1 billion through its IPO, people familiar with the matter said at the time. At the same time, the Luxembourg-based company entertained conversations in the past with potential buyers and joint-venture partners, including Facebook Inc., Google and Cisco Systems Inc., according to other people familiar with the matter. Skype had sought between $5 billion and $6 billion to sell itself, they added. The blog GigaOm earlier reported news of Microsoft's interest in Skype.
—Spencer E. Ante and Roger Cheng contributed to this article. 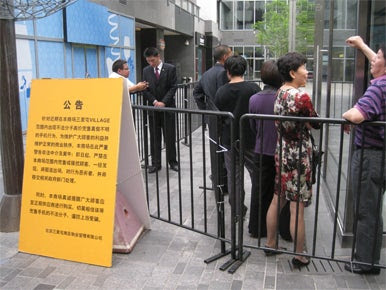 by Michael Kan, IDG News Service May 9, 2011 2:30 pm
The long wait for Apple products in Beijing turned ugly over the weekend when a skirmish erupted outside one of the companyʼs stores, resulting in a broken glass door and injuries to customers and one employee. Appleʼs iPad 2 had just gone on sale, but it was the white iPhone 4, released a week earlier, that caused the trouble.
News of Saturdayʼs incident has circulated in the local Chinese press, with photos on the Web showing an Apple customer bloodied and laying on the ground. A spokesman for Beijingʼs public security bureau said on Monday that the parties involved in the dispute had resolved the matter, but he gave no other details.
Customers wait to buy Appleʼs iPad 2 on Monday, two days after a skirmish erupted outside the Beijing store.
Apple said in a statement that its Beijing store located in the Sanlitun district closed for several hours on Saturday after a group outside of the store “became unruly.”
“The store team acted to protect themselves and our customers by closing the doors and preventing the group from entering. The safety of our customers and employees is our top priority,” Apple said.
In the last two weeks, long lines have formed outside the Beijing Apple store for the local launch of the companyʼs white iPhone 4, and then the iPad 2, which went on sale in the country on Friday. Demand for the products has been so great that sales of the devices have also attracted scalpers, who triggered Saturdayʼs skirmish, according to a source familiar with the incident.
According to that person, a man had tried three times to cut in line to buy the white iPhone 4, and had been escorted aside by Apple security. The man then shoved and grabbed one of the security workers, who pushed back in defense, the source said. The man then fell to the ground, refusing to get up, and his mother then got involved by also pushing the security workers, according to the source.
Apple employees then decided to lock and close the door to the store. A group of people responded by shaking and grabbing the door. The door then shattered, which injured an Apple employee, the source said.
Following the incident, business returned to normal at the store. On Monday, the glass door was already repaired. The long line had also gone, with only about a dozen people waiting to buy an iPad 2 from the store. Notices posted outside, however, warn that the company will contact authorities if scalpers are found selling to or harassing customers.
Apple said the demand in China for its latest product, the iPad 2, has been “amazing.” On Monday morning, Appleʼs Beijing Sanlitun store reported running out of the white version of the device, but still had the black version in stock.
Apple has four stores in China: two in Beijing and two in Shanghai. Apple also uses authorized resellers and its online store to sell its products across China. But on Monday, Appleʼs online store for China appeared to no longer offer orders of its iPad 2 or the white iPhone 4.