Senior US and South Korean government officials plus Chinese activists have login details stolen
Charles Arthur, technology editor
guardian.co.uk, Wednesday 1 June 2011 23.47 BST
A Google employee in Seoul. South Korean government officials are among those who have had their Gmail login details stolen by Chinese hackers. Photograph: Truth Leem/Reuters
Tensions between the US, UK and China over the issue of cyber-attacks were set to escalate after it emerged that Chinese hackers have stolen the login details of hundreds of senior US and South Korean government officials as well as Chinese political activists.
Google said it had discovered and alerted hundreds of people who had been taken in by a carefully targeted "phishing" scam originating from Jinan, the capital of Shandong province. Hackers aimed to get complete control of users' email accounts on the Gmail system.
While there is no direct evidence that the hackers were in the pay of the Chinese government, the sophistication of the attacks and their highly targeted nature eliminates direct financial gain as a motive. Google did not rule out the possibility of the attack being state-sponsored.
The action could seriously heighten tensions over the issue of cyberwar. The US government moved this week to classify cyber-attacks as "acts of war", while the defence minister Nick Harvey said on Monday that "action in cyberspace will form part of the future battlefield".
At an international cybersecurity conference being held in London this week, delegates warned that new cyber-attacks were being developed so quickly that there should be a nonproliferation treaty over their creation and use.
Michael Rake of BT Group warned world powers were being drawn into a hi-tech arms race, with many already able to fight a war without firing a single shot.
"I don't think personally it's an exaggeration to say you can bring a state to its knees without any military action whatsoever," Rake said. He said it was "critical to try to move toward some sort of cyber technology non-proliferation treaty."
The Chinese government has repeatedly denied any involvement in hacking of foreign countries' systems.
The latest series of attacks appears to have been going on since February, according to a report referenced by Google. It said people using Google and Yahoo accounts were being targeted in a "spear phishing" campaign, in which emails crafted to be relevant only to the recipients are sent out with malware or fake links.
If the person opens the email or follows the links, they will be led to sites which will steal their email login details or silently redirect all their email to another address.
One example "spear phishing" email had the title "Fw: Draft US-China Joint Statement" and contained the text: "This is the latest version of State's joint statement. My understanding is that State put in placeholder econ language and am happy to have us fill in but in their rush to get a cleared version from the WH, they sent the attached to Mike."
"Google detected and has disrupted this campaign to take users' passwords and monitor their emails," a spokesman said. "We have notified victims and secured their accounts. In addition, we have notified relevant government authorities. We believe that this campaign to steal users' passwords originated from Jinan, China. We can't say for sure who is responsible."
Google said its own systems were not affected – a contrast with the situation at the end of 2009 when government-sanctioned Chinese hackers broke into the Google systems and are thought to have gained access to highly sensitive codes.
At the same time, Chinese hackers attempted, sometimes successfully, to break into US companies, including Morgan Stanley, and global oil companies.
China is believed to have gained a hugely valuable set of data about US military systems from a US Aries II signals intelligence aircraft that was forced to land on Hainan Island in April 2001 following a midair collision with a Chinese fighter jet.
The White House said it was investigating the claims made by Google.
"We're looking into these reports and are seeking to gather the facts," said spokesman Tommy Vietor. "We have no reason to believe that any US government email accounts were accessed."
FBI spokeswoman Jenny Shearer said: "We are aware of Google's announcement regarding attempts to obtain passwords and gain access to these accounts. We are working with Google to review this matter."

Posted by John H Armwood II at 5:02 PM 3 comments: Links to this post 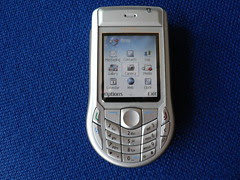 Image by johnmuk via FlickrWorld Health Organization Warns of Cancer from Cell Phone Use - Local News - Fort Wayne, IN - msnbc.com

UNDATED (Indiana’s NewsCenter) – The World Heath Organization announced Tuesday that it now lists mobile phones as a possible cause of cancer.
The WHO also said that no adverse health effects had been established though.
A team of 31 scientists from 14 countries, including the United States, made the decision after reviewing peer-reviewed studies on cell phone safety. The team found enough evidence to categorize personal exposure as "possibly carcinogenic to humans."
What that means is that there needs to be more long term studies conducted to make a clear conclusion.
The type of radiation coming out of a cell phone is called non-ionizing. It is not like an X-ray, but more like a very low-powered microwave.

Posted by John H Armwood II at 10:38 PM No comments: Links to this post