The HTC Feeler has been out overseas on Euro T-Mo for a while now as the T-Mobile SDA (not to be confused with the European SDA Music / American T-Mo SDA / HTC Hurricane — yes, we know this is unnecessarily complicated), but it looks like HP’s rebadging it as the iPAQ SmartPhone rw4500. If this is in fact destined for US release it seems kind of silly, considering the US SDA / Hurricane is essentially the same device as the Feeler, but with a QVGA display (compared to 220 x 176), 1.3 megapixel camera (compared to VGA), and music buttons. Then again, we are all for more Smartphones, smartphones, and, um, good phones on T-Mobile, so let’s have ‘em!

China's first anti-Spam organization for informtion technology administrators, the Anti-Spam of the Internet Society of China (ASISC) has launched.

The ASISC includes computer networking administrative professionals who are cooperating together to build a highly efficient and safe anti-spam management system.

The group also seeks to establish a good Internet society image and team up with international anti-spam initiatives.

More than 100 million Chinese use e-mail services frequently. At the same time, it becomes the top receiver of junk mails. According to a survey, Chinese netizens receive over 10 junk messages every week on average.
Posted by John H Armwood II at 9:48 AM 3 comments: 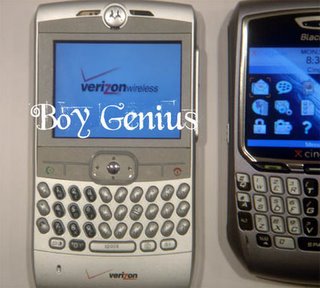 Ok, one bit of solid product news out of Mobius today: we pretty much already knew this, but Motorola just officially confirmed that they’re going to be launching the EV-DO version of their Q Smartphone in the first quarter of next year. They wouldn’t go so far as to confirm which carrier is getting it, but it’d be very, very surprising if it wasn’t Verizon. So what happens to the EDGE version of the Q they were showing off a few months ago?
Posted by John H Armwood II at 10:22 PM No comments:

Maybe instead of forcing poor manufacturers to reduce costs (and compromise quality?), Microsoft should use above mentioned effects, particularly synergy effect: Microsoft should embed advertising of Windows Mobile into existing marketing campaigns of other Microsoft products (like operating systems, office software, database software, etc).... Read on!

Microsoft plans to team up with Taiwan ODM handset makers and own-brand handset vendors to manufacture sub-US$300 PDA phones in a bid to help the company expand its share of the global OS (operating system) market for mobile devices, according to sources at Taiwan makers and vendors.
Posted by John H Armwood II at 10:07 PM No comments:

Smartphone Thoughts - Daily news, views, rants and raves:Friday, December 9, 2005
OFF-TOPIC
Gartner's Advice: Stop Deploying BlackBerry
Posted by Jerry Raia @ 12:00 PM
"Enterprises should not deploy or invest in Research In Motion's BlackBerry "until RIM's legal position is clarified," market research firm Gartner said this week. In addition, Gartner urged enterprises to demand that Research In Motion (RIM), which has been struggling in a patent action brought against it by NTP, should publicly detail its plans for a workaround should it loose its suit. Besides getting details on the workaround, enterprises should also "carefully review their legal and operational impact," Gartner said in a research advisory."

Gartner has been know to go over the top sometimes. This is a bit different though. The situation with RIM is serious with regard to the number of users affected. I have to admit the thought all those Blackberry things suddenly becoming paper weights make me happy.
Very Happy"
Posted by John H Armwood II at 2:35 PM No comments:

The company said it would create 3,000 new jobs in the country and pump more money into research and development.

Microsoft is keen expand its operations in India, a country where well-trained workers are available at a fraction of what they cost in the West.

Intel said it planned to substantially boost research and development in the country over the next five years.

Microsoft chairman Bill Gates said the company wanted to increase its workforce in India to "7,000 over the next three to four years".

He said the $1.7bn investment "would be deployed across select focus areas over the next four years in line with Microsoft's strategic vision for India".

India's Information Technology minister Dayanidhi Maran said news of the investment was "an indicator of the value that Microsoft attaches to its development and R&D activities in the country".

Microsoft currently outsources a number of services to India

Earlier this year, the company opened a research centre in India's southern city of Hyderabad.

Microsoft plans to open a innovation centre in India's technology hub Bangalore next month.
Story from BBC NEWS:
Posted by John H Armwood II at 8:09 AM No comments:

msmobiles.com - Review of Cingular 2125 - new MS Smartphone that is coming soon to USA

Well the device doesn’t have WiFi. As I stated earlier, I don’t really care. With EDGE I have been seeing speeds between 150-210kb/s. I ran 6 tests on the Mobile Speed Test at dslreports.com. For the tests I selected either the 200kb or the 600kb file size. I think they best represent actual speed of the device. On average I would say I was seeing about 175kb/s for either file size. Sure it would be nice to have the 1mb/s+ speeds of WiFi, but with the relatively low cost ($19.99) for unlimited data on Cingular, I’m ok with not having it. With a device like the wizard which has a larger screen, it would be a different story, but the small screen really doesn’t need it (IMHO). If you HAVE to have WiFi, you’ll be paying the $499 for the SP5(m) or waiting who knows how long for the TMobile device.
Posted by John H Armwood II at 11:02 PM 16 comments: