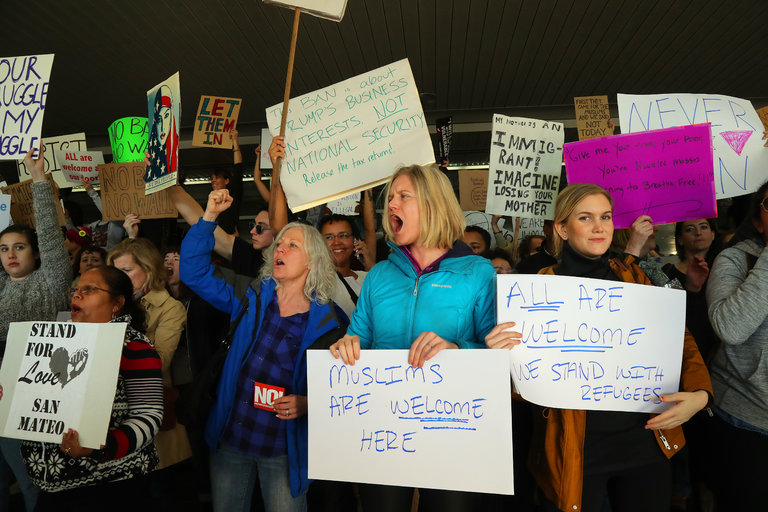 "SAN FRANCISCO — On Friday morning, Silicon Valley was largely ambivalent about President Trump. The software programmers, marketing experts and chief executives might not have voted for him, but they were hopeful about finding common ground with the new administration.

By Saturday night, much of that optimism had yielded to anger and determination.

Mr. Trump’s executive order late on Friday temporarily blocked all refugees while also denying entry to citizens of Iran, Iraq and five other predominantly Muslim countries. The directives struck at the heart of Silicon Valley’s cherished values, its fabled history and, not least, its embrace-the-world approach to customers. Two worldviews collided: the mantra of globalization that underpins the advance of technology and the nationalistic agenda of the new administration.

In response, a significant part of the tech community went to the barricades.

Netflix’s chief executive, Reed Hastings, wrote on Facebook that Mr. Trump’s actions “are so un-American it pains us all” and that “it is time to link arms together to protect American values of freedom and opportunity.”

Brian Chesky, the chief executive of Airbnb, made the same point. “We must stand with those who are affected,” he wrote on Twitter.

A Google founder, Sergey Brin, who immigrated from the Soviet Union when he was 6, seemed to take that suggestion literally, attending an impromptu protest on Saturday evening at San Francisco International Airport. When some of the demonstrators realized that the 10th-richest man in America was with them, they asked for selfies. He good-naturedly obliged.

“I’m here because I'm a refugee,” Mr. Brin said, according to one protester.

The tech companies’ reaction was more forceful than that of other industries. Just about everyone in Silicon Valley came from somewhere else or is a son or daughter of someone who did or is married to someone who did.

That list starts with the most famous Silicon Valley citizen of all: Steve Jobs, the Apple co-founder, whose biological father immigrated from Syria in 1954. Mr. Trump’s order proclaimed that “the entry of nationals of Syria as refugees is detrimental to the interests of the United States” and would be suspended indefinitely.

Zuckerberg, Facebook’s chief executive, said that his great-grandparents had come from Germany, Austria and Poland, and that the parents of his wife, Priscilla Chan, were refugees from China and Vietnam.

“Like many of you, I'm concerned about the impact of the recent executive orders signed by President Trump,” Mr. Zuckerberg wrote on Facebook on Friday."