Nasa: Earth is warming at a pace 'unprecedented in 1,000 years' | Environment | The Guardian 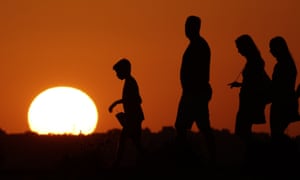 "The planet is warming at a pace not experienced within the past 1,000 years, at least, making it “very unlikely” that the world will stay within a crucial temperature limit agreed by nations just last year, according to Nasa’s top climate scientist.

This year has already seen scorching heat around the world, with the average global temperature peaking at 1.38C above levels experienced in the 19th century, perilously close to the 1.5C limit agreed in the landmark Paris climate accord. July was the warmest month since modern record keeping began in 1880, with each month since October 2015 setting a new high mark for heat.

But Nasa said that records of temperature that go back far further, taken via analysis of ice cores and sediments, suggest that the warming of recent decades is out of step with any period over the past millennium.

Nasa: Earth is warming at a pace 'unprecedented in 1,000 years' | Environment | The Guardian
Posted by John H Armwood II at 2:09 PM