Opinion | Will the Legitimacy of the Supreme Court Survive the Census Case? - The New York Times 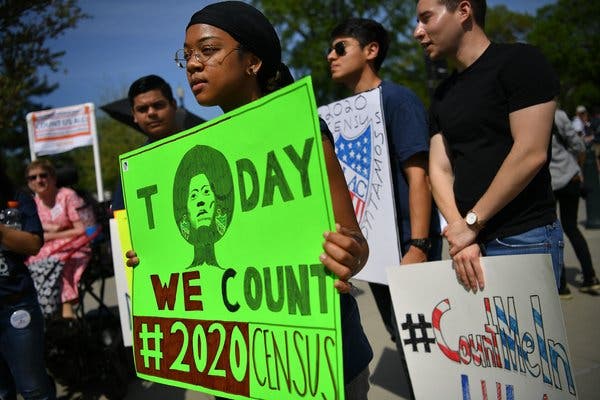 Last year, the court overlooked the anti-Muslim animus of the travel ban and ruled for the administration. It should not be taken in again.

Mr. Geltzer is the executive director and a visiting professor of law at Georgetown University Law Center’s Institute for Constitutional Advocacy and Protection.

Demonstrators outside the Supreme Court in April protested the proposed addition of a citizenship question to the 2020 census.

The Supreme Court is poised to decide one of its most divisive cases since litigation around the travel ban: the challenge to the Trump administration’s attempt to add a citizenship question to the 2020 census.

Even as the justices deliberate on this case, shocking new reporting offers critical support to opponents of the administration’s position. It strongly suggests that the justification from Trump administration lawyers, in their presentation before the Supreme Court, for adding a census question on citizenship was an outright falsehood, or at the least a deliberate pretext. A recently deceased Republican strategist, whose 2015 study showed that adding a citizenship question to the census would supercharge pro-Republican gerrymandering, provided the actual rationale and wrote key language that informed a Justice Department letter claiming that the citizenship question was needed to enforce the Voting Rights Act.

We have seen this drama before. Last year, the Supreme Court faced similar questions of blatant misrepresentation from the Trump administration in the case on the travel ban. The court overlooked the sketchy details in that case and decided in the administration’s favor.

In this term’s most important matter, the court should not be taken in.

During the travel ban case, I remember sitting in the courtroom astonished when the solicitor general claimed to the justices that President Trump had “made crystal-clear” that he had “no intention of imposing the Muslim ban” — a ban that, as a candidate, Mr. Trump had repeatedly promised.

In such a case, the justices look for evidence of animus against a particular group. And so establishing the connection between Mr. Trump’s pervasive anti-Muslim remarks and the ban he promulgated was a core aspect of the challengers’ argument.

Ultimately, the conservative justices in the majority voted to uphold the ban, deciding that it was a valid exercise of the president’s authority.

In the census case, which the Supreme Court will soon decide, the administration was challenged on the grounds that the addition of a citizenship question violated proper administrative procedures and would violate, by design, the constitutional guarantee of equal protection by discriminating against minority groups and immigrants, especially of certain nationalities.

In three federal lawsuits, judges have ruled against the administration’s action.

Much as I was taken aback a year ago as the travel ban case was argued, during argument day for the census case I was astonished to hear the solicitor general insist that the question’s addition was intended to facilitate enforcement of the Voting Rights Act. The facts brought out at trial made clear that this was a mere pretext for a pre-existing commitment to adding a citizenship question.

The information recently revealed from the Republican strategist confirms in dramatic fashion what the trial record already showed: The Trump administration’s actual reason for the citizenship question is entrenching Republican political power. Adding the question, according to opponents of the move, would deter many immigrants from participating in the census and thus from being counted, which would in turn help Republicans.

A letter filed on Thursday with the Supreme Court rightly says that adding the question began as an effort “to create a structural electoral advantage” for “‘Republicans and Non-Hispanic Whites.’” And a judge in the United States District Court in Manhattan, who had ruled against adding the question, set a hearing for next week to evaluate, among other implications, whether these documents mean that key witnesses lied during trial. The hearing may produce stark evidence directly relevant to the Supreme Court’s handling of the case.

On Thursday, the Justice Department said that the new information was merely “a last-ditch effort to derail the Supreme Court’s consideration of this case” and added that the 2015 study had “played no role” in the department’s request to reinstate a citizenship question.

The Justice Department also said that it will explain itself in a court filing. Perhaps there’s some explanation for why this isn’t the smoking gun it appears to be. But we already have a shooting gallery of smoking guns from the trial record demonstrating that the Trump administration’s justification was mere pretext. The new evidence has made it, at a minimum, a lot smokier.

The legitimacy of our judicial system depends on judges and justices deciding cases on the facts — the real facts, not a distortion of them offered by one party to a case.

The Supreme Court now faces a choice: How will a majority of the justices handle another attempt by the Trump administration to mislead the court? There is a sad history, dating at least as far back as the infamous Korematsu decision during World War II — a shameful decision upholding the forcible relocation and internment of Japanese-Americans — of the court reaching unfortunate decisions based on misrepresentations by the government that are later proved false.

But there’s still time for the court to get the census case right by looking past the pretext to the Trump administration’s real motivation for adding a citizenship question. For the sake of its own legitimacy, the court must do so and avoid getting snookered by Trump’s lawyers."

Opinion | Will the Legitimacy of the Supreme Court Survive the Census Case? - The New York Times
Posted by John H Armwood II at 5:53 AM