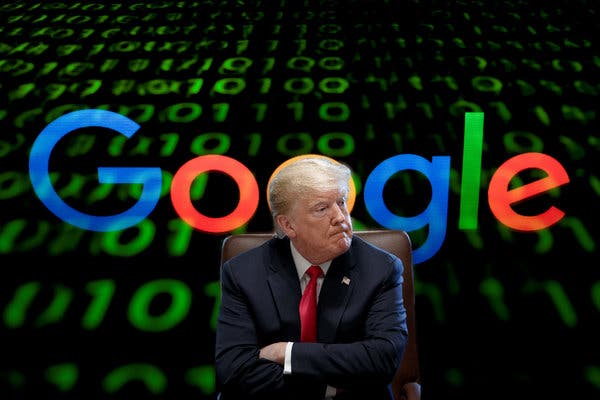 "Here’s the truest conundrum of the social media age: Those who complain loudest about being silenced never ever shut up.

Case in point are some tweets this week from President Trump, who wrote his umpteenth in a series of attacks on the big tech platforms.

The latest sputter — that’s a digital equivalent that falls between clearing your throat of mucus and vomiting slightly in your mouth — was aimed at Google. In an angry finger-tapping burst in two parts, Mr. Trump accused Google of skewing its search results against him:

“Google search results for ‘Trump News’ shows only the viewing/reporting of Fake News Media. In other words, they have it RIGGED, for me & others, so that almost all stories & news is BAD. Fake CNN is prominent. Republican/Conservative & Fair Media is shut out. Illegal? 96% results on ‘Trump News’ are from National Left-Wing Media, very dangerous. Google & others are suppressing voices of Conservatives and hiding information and news that is good. They are controlling what we can & cannot see. This is a very serious situation — will be addressed!”

Will. Be. Addressed. Oh my. Is that a threat? I guess it might be if you were a low-rent version of a movie gangster, obsessively searching Google News over and over again in the middle of the night.

But the big tech platforms should not be even slightly afraid since the threat is an empty one. The allegation is both wildly untrue and mostly easily proved false in all kinds of ways. (For example, I doubt that Mr. Trump has ever heard of page rank, since he recently showed he also cannot work a phone so well.)

Most of all, the allegation leaves out the pertinent fact that Mr. Trump himself is the most voluble politician ever to use digital media, and his entire existence has been amplified, echoed and re-echoed over and over again by the tools that Silicon Valley has let loose on the world over the past two decades. To say nothing of the widespread belief in the United States intelligence community that Russians manipulated social media in his favor.

Rather than attacking techies, he should send them a gold-embossed thank you note.

Instead, as is his way, Mr. Trump huffs and puffs away on issues that have finally bubbled up to him from the ever-growing cesspool of online anger, especially the truly ludicrous idea that Silicon Valley does not like conservatives.

I can vaguely hear the always aggrieved tones of Mr. Trump’s tech whisperer, the entrepreneur and investor Peter Thiel, somewhere in there, who often goes on about having to move to … wait for it … Los Angeles to get away from the lefty groupthink in Northern California. While I am not going to be the one to tell him about those Hollywood types, it is extra rich since he became a billionaire via investing in all those supposed liberals, like those socialists over at Facebook.

That is obviously a joke, because, in fact, most tech leaders are more often lightweight versions of libertarians and largely apolitical except for backing gay and transgender rights and wanting to allow more qualified immigrants into the country to make more tech.

Otherwise, in my reporting, I have found that they love those tax cuts and adore the repatriated income and can’t get enough of deregulation. Sure, they don’t cotton to the anti-climate-change nonsense Mr. Trump spews and can’t stand the endless bullying, but let’s stop to reflect that they have handed him all the weapons in his online arsenal to do that.

So whether it’s the idea that Twitter “shadow bans” right-wing conservatives or that Facebook and YouTube have made a left-leaning decision that a vile and mendacious actor like the Infowars conspiracy theorist Alex Jones perhaps needs to be thrown off services for his vile and mendacious behavior, it’s all codswallop.

You can look that fine word up on Google if you want to know what it means, by the way. That is also where you can also reach every single conservative, alt-right and white nationalistic site in a millisecond. And Google is just one platform of so many that have allowed every one of those voices to thrive and proliferate in untold — and in some cases, dangerous — ways.

It is certainly true that some of tech’s egregious sins — like allowing malevolent actors to use their platforms malevolently or disadvantaging smaller start-ups from innovating, which might be covered in Senate hearings next week where top Facebook, Google and Twitter leaders are expected to appear — need to be addressed by some sort of regulation to come.

But stifling even vile human speech is not one of them. It’s hard to make tech giants sympathetic, but Mr. Trump has managed to pull it off with cloddish aplomb with nearly every accusation of their being unfair in this regard.

Last week, for example, he tweeted: “Social Media Giants are silencing millions of people … People have to figure out what is real, and what is not, without censorship!”