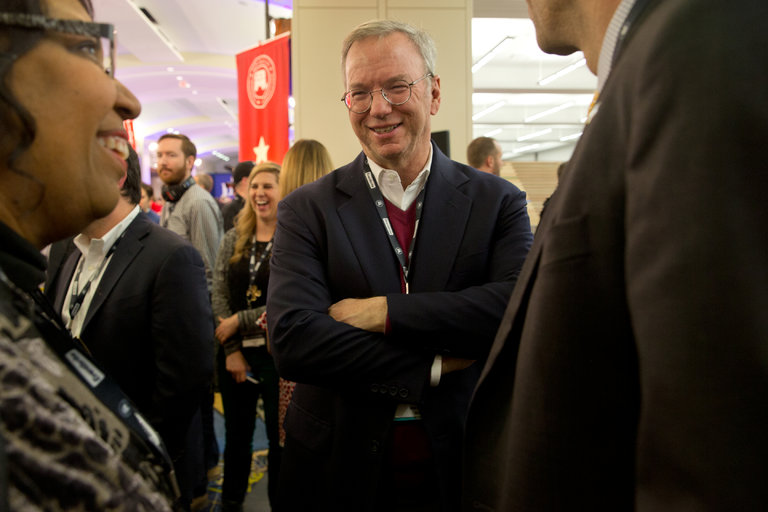 "WASHINGTON — In the hours after European antitrust regulators levied a record $2.7 billion fine against Google in late June, an influential Washington think tank learned what can happen when a tech giant that shapes public policy debates with its enormous wealth is criticized.
The New America Foundation has received more than $21 million from Google; its parent company’s executive chairman, Eric Schmidt; and his family’s foundation since the think tank’s founding in 1999. That money helped to establish New America as an elite voice in policy debates on the American left.
But not long after one of New America’s scholars posted a statement on the think tank’s website praising the European Union’s penalty against Google, Mr. Schmidt, who had chaired New America until 2016, communicated his displeasure with the statement to the group’s president, Anne-Marie Slaughter, according to the scholar.
The statement disappeared from New America’s website, only to be reposted without explanation a few hours later. But word of Mr. Schmidt’s displeasure rippled through New America, which employs more than 200 people, including dozens of researchers, writers and scholars, most of whom work in sleek Washington offices where the main conference room is called the “Eric Schmidt Ideas Lab.” The episode left some people concerned that Google intended to discontinue funding, while others worried whether the think tank could truly be independent if it had to worry about offending its donors.

Those worries seemed to be substantiated a couple of days later, when Ms. Slaughter summoned the scholar who wrote the critical statement, Barry Lynn, to her office. He ran a New America initiative called Open Markets that has led a growing chorus of liberal criticism of the market dominance of telecom and tech giants, including Google, which is now part of a larger corporate entity known as Alphabet, for which Mr. Schmidt serves as executive chairman.
Ms. Slaughter told Mr. Lynn that “the time has come for Open Markets and New America to part ways,” according to an email from Ms. Slaughter to Mr. Lynn. The email suggested that the entire Open Markets team — nearly 10 full-time employees and unpaid fellows — would be exiled from New America.

While she asserted in the email, which was reviewed by The New York Times, that the decision was “in no way based on the content of your work,” Ms. Slaughter accused Mr. Lynn of “imperiling the institution as a whole.”
Mr. Lynn, in an interview, charged that Ms. Slaughter caved to pressure from Mr. Schmidt and Google, and, in so doing, set the desires of a donor over the think tank’s intellectual integrity.
“Google is very aggressive in throwing its money around Washington and Brussels, and then pulling the strings,” Mr. Lynn said. “People are so afraid of Google now.”

Google rejected any suggestion that it played a role in New America’s split with Open Markets. Riva Sciuto, a Google spokeswoman, pointed out that the company supports a wide range of think tanks and other nonprofits focused on information access and internet regulation. “We don’t agree with every group 100 percent of the time, and while we sometimes respectfully disagree, we respect each group’s independence, personnel decisions and policy perspectives.”

New America’s executive vice president, Tyra Mariani, said it was “a mutual decision for Barry to spin out his Open Markets program,” and that the move was not in any way influenced by Google or Mr. Schmidt.

“New America financial supporters have no influence or control over the research design, methodology, analysis or findings of New America research projects, nor do they have influence or control over the content of educational programs and communications efforts,” Ms. Mariani said. She added that Mr. Lynn’s statement praising the European Union’s sanctions against Google had been temporarily removed from New America’s website because of “an unintentional internal issue” unrelated to Google or Mr. Schmidt.
Ms. Mariani and Ms. Sciuto said Google is continuing to fund New America.

It is difficult to overstate Mr. Lynn’s influence in raising concerns about the market dominance of Google, as well as of other tech companies such as Amazon and Facebook. His Open Markets initiative organized a 2016 conference at which a range of influential figures — including Senator Elizabeth Warren of Massachusetts — warned of damaging effects from market consolidation in tech."